Terror attacks against the US has led to a swift invasion of Afghanistan, this has allowed the Foundation unprecedented access to the country, whereas previously hands were tied by international pressures. The area where the US 10th mountain division is applying large amounts of pressuer is the region between Badghis and Bala Murghad. this region is colloquially known as Lythium due to the large deposits and industry that has sprung up around them. It is also the site of black ops conflict conducted during the Soviet - Afghan War in the 80's. The Foundation during their regular investogations of security networks happened across reports that lead us to believe there is an anomalous presence in the Lythium valleys (See attached Appendices).

MTF Tau-44 has been attached to 10th Mountain division in their assault on AO PHEONICIAN in the Lythium region, while they will be assisting in the pacification of the region the primary objective is to investigate reports of anomalous activity related to an unknown pathogen. While reports are not identical to that of 20 years ago there is evidence of unusually sturdy soldiers operating in the Town of Arobster. If there is any evidence of organised involvement of such soldiers they will be found in one of the FOB's, as such Tau-44 has been tasked with a flanking attack and assault of one such site. British intelligence has provided satellite imaging to all allied forces operating in the area. 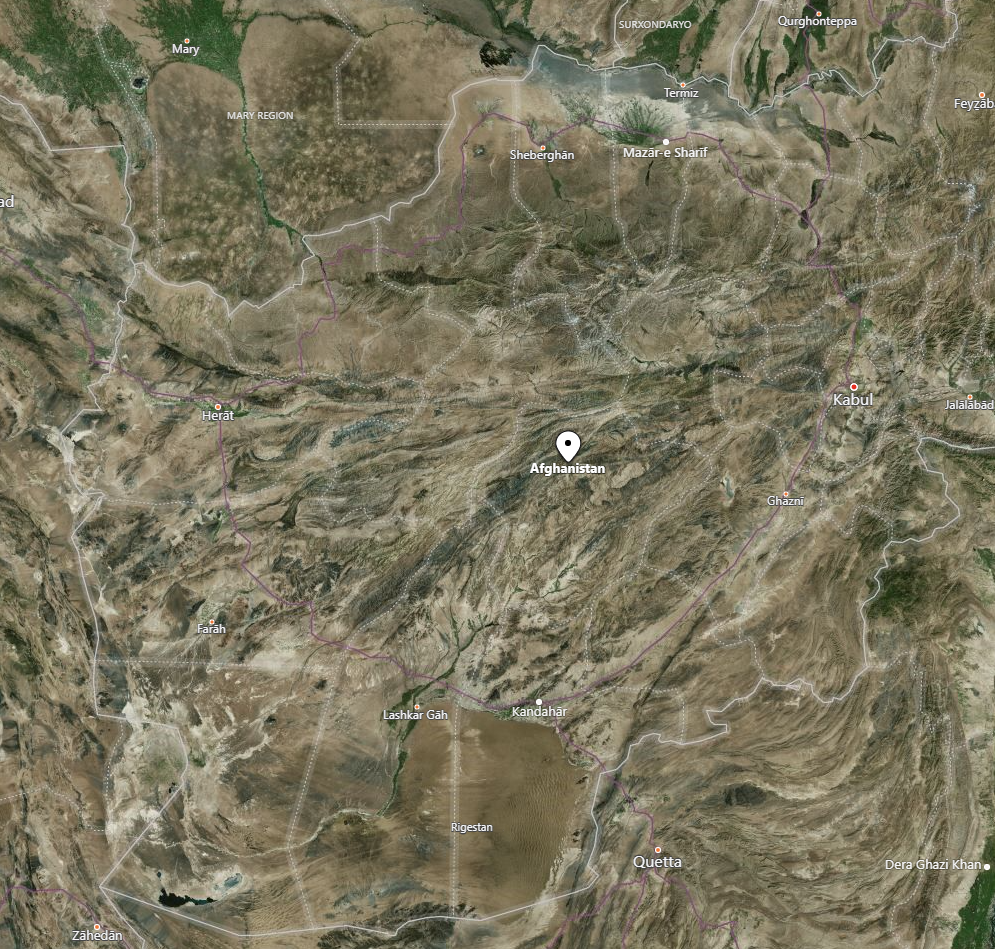 Obstacle – There are no natural obstacles that obstruct movements.

Key Terrain – Surrounding hills a minaret and several tall buildings all will provide solid positions for bases of fire.

Avenue of approach – Tau-44 will approach from the south to storm a portion of the town.

Locations – Two FOB's, one handled by the US 10th Mountain Division and one for us to .

Habits – Enemy known to utilise IED's, Suicide Bombers and mortar strikes on allied positions should they be close to losing a given fight..

US 10th Mountain will be approaching from the east with an armoured and mounted company, armour will hang back until absolutely needed as destruction of the town is to be kept to a minimum. However should fighting be too fierce mortars and CAS can be called in through the Directors authorisation, such support will fire only on RED SMOKE.

Tau-44 is to CLEAR designated areas of the town, DESTROY enemies IVO the FOB and SEARCH for intel IRT reported anomaly. Avenue of approach – Tau-44 will approach from and use the hills to gain height and fire superiority.

Locations – Enemy forces to be expected all throughout the red zone.

Habits – Enemy known to utilise IED's, Suicide Bombers and mortar strikes on allied positions should they be close to losing a given fight.

The US Infantry cleared the rest of south Arobster and uncovered the Intel that O4 had sent Tau-44 after. They have shared this with us at least in part and found a number of potential sites that house المحاربين الموهوبين which translates to ‘Gifted Warriors’. US SOCOM believes this is where enemy special forces have been stationed, we however believe that these soldiers are the remnants of Russian experimentation and are likely to be enhanced with the anomalous pathogen. So far we do not believe it is contagious however efforts should be made to eliminate all enemies suspected to be infected at ranged and burn their corpses, should samples be returned for examination this could prove useful. 10th Mountain Division are experiencing intense fighting across the southern borders of the city and in Arobster and as such can not provide support outside of an A10 that will be on station and a UH-1 transport helicopter at the airfield. If the mission cannot be complete or goes awry all forces are to retreat south back to Iban Base Camp.

Tau-44 is to ingress into the red zone and DESTROY all enemies at OBJ1, OBJ2 & OBJ3 and SEARCH for intel IRT reported anomaly. 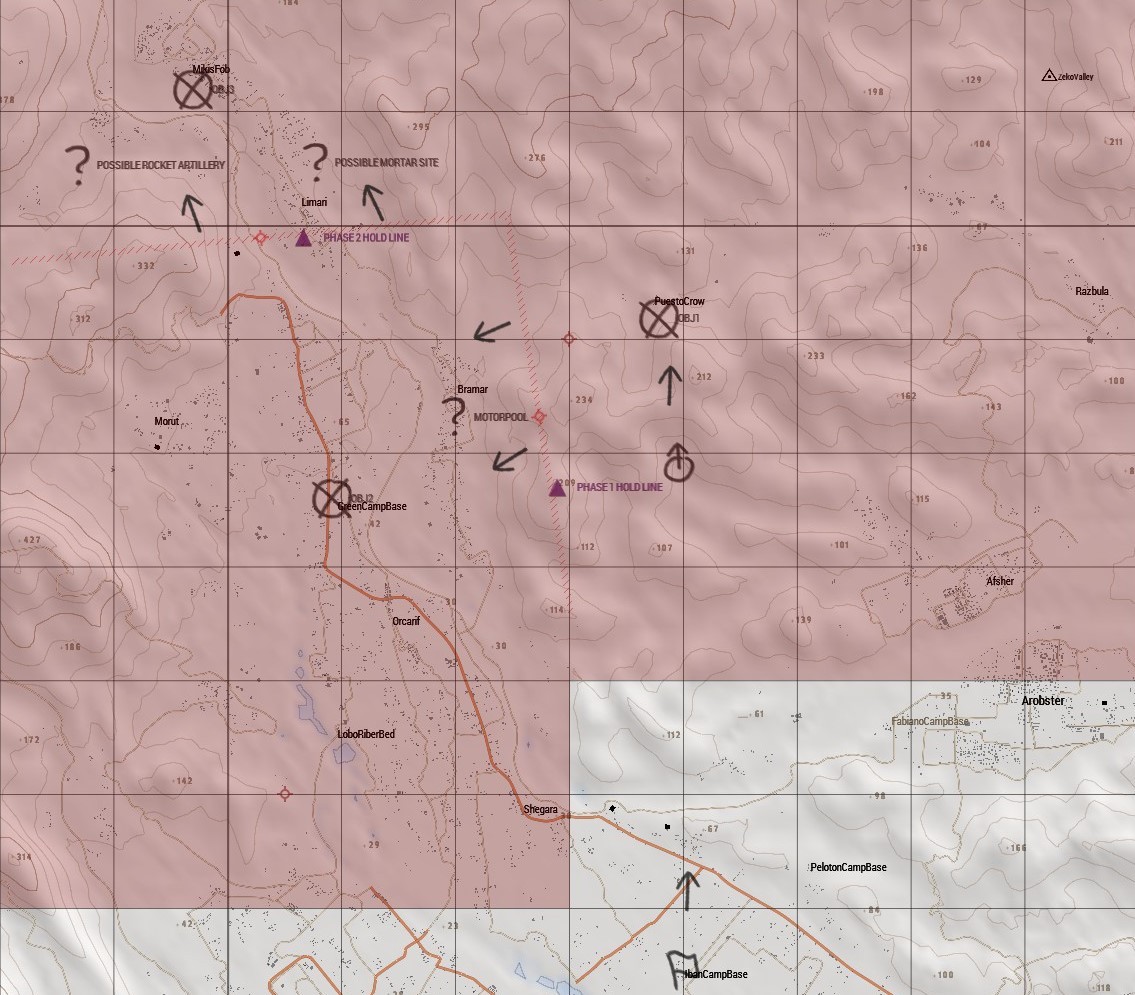 Phase 1 – Hoplite 1-1 is to CLEAR OBJ1 Puesto Crow before moving to Phase line 1.

Phase 2 – Hoplite 1-1 is to CLEAR OBJ2 GreenCampBase before moving to Phase line 2.

Phase 3 – Hoplite 1-1 is to CLEAR OBJ3 MikeFob before extracting to Iban Base Camp. Secondary Objectives marked with a ‘?’.

Obstacle – A dried river bed between the two sides of town provides no physical obstruction but presents the danger of being open to fire from both sides.

Avenue of approach – Tau-44 will approach from the south..

The report by Hoplite 1-1 section leader has prompted O4 council to order the capture of the Prophet and any Kandar villagers. Once again retrieval of the corpses of Sons of Kandar or those that are affected by the pathogen are top priority. The Sons of Kandar are most likely the Gifted Warriors mentioned in Phase 2, very small amounts of them may had been encountered but due to the ferocity of firefights recovery of the bodies has been impossible, as such we will be striking Kandar itself. Hoplite 1-1 Section Leader AAR is attached in the Appendix of this briefing, see below.

Kandar is currently home to 351 people about half of which are fighting age males, the population in 1981 when first anomalous activity was recorded was roughly 1600 people. We suspect they know that we are coming and will have moved any civilians away. Research into census records along with travel information, death records and birth certificates has shown that there have been only 24 deaths but around 3480 births over the 20 year period to date. The standard birth rate for Afghanistan is 4.7%, however the birth rate in Kandar appears to be at 11%. A large portion of the population has fled the country, the records here are much harder to follow and more research by our analysts will be needed before we can ascertain the exact number and whereabout of the potential infected individuals.

The US 10th Mountain Division had already sent a recon element to investigate Kandar, most likely off of the information in the intelligence found in Arobster, but after radioing in saying that a localised electrical storm had formed over Kandar and that their NVG’s had stopped working they came under assault. The recon element’s final transmissions are transcribed in the Appendix Section of this briefing, see below.

Due to the unknown electrical phenomena that may be present any electrical hardware will need to be avoided, similarly vehicles are prohibited from approaching within 2km’s of the village. Support assets will be unable to assist either, due to this TAU-44 will need to strike quickly, snatch any civilians and the Prophet and leave, any Sons of Kandar that are injured can be tied and carried out. It is imperative that our forces do not get bogged down in a firefight.

The Prophet is theorised to be a man named Nikolai Vlasov, son on Dmitriy Vlasov the scientist which was extracted by Commonwealth forces in 1981. Dmitriy spent 10 years incarcerated before being released, he was under a travel ban for a further 5 years before he disappeared. Records show that he landed at Hamid Karzai International Airport in Kabul 1997 where he was met by his son who he had with a local woman. Dmitriy returned to Kandar until June 2000 where he travelled to Moscow and was killed in a shooting, a shooting that was suspected to be a government sanctioned hit. He was survived by his son Nikolai who by age 19 had attained a masters degree in physics and genetics. Nikolai Vlasov has received training in weapons and tactics by Taliban forces in Afghanistan and along with his intelligence should be apprehended very carefully.

Caution is advised when travelling north as it is still a hotly contested area, MikisFOB is only loosely US held and anywhere north of that is not to be considered friendly territory, as such insertion by chopper to STAGING AREA is permitted with vehicles to follow once TAU-44 is on mission.

Tau-44 is to ingress into Kandar and retrieve Nikolai Vlasov along with as many civilian prisoners as possible. Phase 1 – Hoplite 1 is to INFILTRATE OBJ1 Kandar and apprehend the PROPHET.

Phase 3 – Hoplite 1 is to deliver all prisoners to South Airfield.

A disturbance was reported at the Southern Lithium Refinery and Storage facilities at 2331 on 11/02/2016, 10th Montain Division sent a platoon to investigate the area. Shortly after a massive energy reading was recorded before all communications from the site went dark. Drones show no movement and no light sources.

The US has mobilised a brigade to investigate the area and will arrive in FIVE HOURS however due to the known presence of SCP-12062 in the area Tau-44 will need to arrive and investigate first. No ionisation is measured around Kinduf Airbase though large reading appear to be emanating from the East.

Given the level of energy recorded it is expected that multiple instances of SCP-12062-3 may be present and that they have caused a large amount of ‘reality tearing’. To combat this we have requisitioned a Three-Stage Thermonuclear (3-STNW) devise consisting on Fission, Fusion and Antimatter catalysation reactions. Our analysts believed this should be enough to collapse any unstable doorways into SCP-12062’s home reality that SCP-12062-3 may have caused. Due to electronic and radio disturbances a timer will need to be set on an M112 Demo Block which will be used to trigger the 3-STNW.

Efforts will be made to have the blame fall on insurgent actions in the area.

The 3-STNW will be airlifted into Kinduf during your patrol and will need to be moved to the Lithium Refinery over land. The US military vehicles at Kinduf should be hardened against electronic warfare and as such some should still function as a transport for both infantry and the 3-STNW.

Investigate Kinduf Airfield and the Lithium Refinery for the cause of the energy reading and silence from the area. If necessary, collapse any open portals with the 3-STNW.

Phase 3 – Hoplite 1 is to investigate Lithium Refinery and search for ‘reality tearing’.

Procedure for calling in strikes.

Additional equipment can be requested prior to operation by Hoplite 1 Actual. Recon 1: “Comms are weak, say again last?”
Recon 2: “Top, we got contact right, two times EI, bearing zero-two-four, half way up that hill near the tree line”
Recon 1: “Cambelin, check GPS and mark where you think that is, we are going to cross this defilade and move towards the town up the hill at three-two-zero”
Recon 3: “Copy, did you hear back from command, I think the hills are playing with comms?”
Recon 4: “I got point”
Sounds of movement continue for 186 seconds
Recon 4: “Sargeant I can hear buzzing, what is…”
Loud crack followed by thunder.
Recon 2: “Jesus fucking Christ, Sarge, Smith is down, that lightning hit him, nods detonated on his head, fuck, I don’t think…”
A loud bang noise followed by a thud.
Recon 1: “Shit, what the fuck was that, did a grenade go off on his hip?”
Recon 1: “10th actual we got TWO KIA and are compromised, request immediate extraction by chopper we are exfilling with all… what the fuck is that?”
All transmissions end.

IOT - In Order To

IVO - In Vicinity Of