The Holy Order of the Knights Templar, Reformed (commonly referred to as the Knights Templar, or simply Templars) was founded in 1119 and disbanded in 1312 by Pope Clement. They re-emerged during World War Two/the Seventh Occult War, declaring their opposition to the Ahnenerbe Obskurakorps, after which they became members of the United Nations (UN) Global Occult Coalition (GOC).

The Knights Templar remained one of 108 such peers within the GOC, providing chaplains, exorcists and priests to aid joint GOC operations. This continued until 2019, when the organisation underwent major restructuring, publishing a new mission statement and stated goals. In 2020, the GOC unanimously ejected the Knights Templar from their coalition, citing concerns over the Templars' new and ongoing attempts to execute a hostile takeover of the "Holy Lands" in what they refer to as a "Crusade". Since their removal from the GOC, the Knights Templar have massively expanded their capabilites to facilitate their goals of securing any and all artifacts related to Christianity - by force, if necessary - as well as forcibly seizing control of important holy sites.

To date, the order has seen success securing parts of Israel, Palestinian territories, and western Jordan, through the use of large mercenary armies and an enormous technological advantage.

The Order claims to be led by 13 individuals referring to themselves as the Knights of the Round Table - a council of businesspeople, military commanders, and underworld power brokers, each with their own significant contributions to the Order's goals. The usage of the Round Table of Arthurian legend as their leadership structure is a new addition to the Order, believed to have taken place after the former organisation leader's son carried out a hostile takeover; according to multiple accounts, this was done as the new leader objected to "failing direction" and "lack of respect for tradition" from the old structure.

A number of private international companies and organisations are known to be ran directly by one or more of the 13 individuals named in the Order's restructured leadership team, including:

Leadership Change of the Templars

In 2019, the Templars experienced a drastic shift in goals and organisation, going from a mostly advisory group within the GOC to suddenly utilising the assets of Templar member companies to violently sieze artifacts and territory historically associated with Christianity. Foundation assets within the GOC report that the Templars ceased communication with the GOC around this time, declining requests to explain their sudden change in attitude.

The Foundation was initially unaware of the motivation behind the changes, until the retrieval of audio recordings captured by covert listening devices. These devices were placed by the former Templar Grand Master, Charles Angelo, who also acted as CEO of Techa Innovations, a relatively secret technology company.

The audio transcript is as follows:

Shortly after this log was recorded and recovered, the listening device was discovered during a sweep suggested by Edwin Croft ("Lancelot"), not long after he arrived to meet the new Grand Master ("Arthur"). The log sheds some light on what, and why, the sudden change in the Templars' behaviour occurred.

The son of the former Grand Master had approached individual members of the Templars, as well as the Vatican, seeking support to transfer leadership from his father to himself. "Arthur" reportedly faced little opposition in this, as the existing leadership had grown tired of their involvement in the GOC and generally agreed to support the takeover. With those leaders backing him, "Arthur" confronted his father and requested his help to separate from the GOC that took them for granted, returning to the original vision of the Knights Templar and their traditions. When his father resisted, "Arthur" killed him in cold blood.

Within a week of the hostile takeover, the Knights Templar invaded northern Egypt with 22,000 Caliburn Security Services mercenaries, sailing ships full of heavy ordnance to gain footholds at docks. From there they set out into western Israel, beginning the violent slaughter of any towns and villages in their path. Since then they have taken and held Jerusalem, parts of Israel, western Jordan, and the entirety of Palestinian territories.

The Israeli Defence Force - lacking the support of the former United States of America - was unable to mount effective resistance to the Templars' "crusade", only successfully defending Tel-Aviv. The Jordanian Government also attempted to resist, and was quickly pushed out before unconditionally surrendering contested lands to the Templars.

Ranking System of the Knights of the Order

While the order employs a large number of mercenaries for its military tasks, it also has its own full-time standing army. This army is highly trained, very well funded, and utilises the latest in military technology - often using cutting-edge, purpose-built and prototype technology to enhance their capabilities. As several Knights of the Round Table are known to be CEOs of enormous military technology research and development enterprises, their direct access to such advanced and powerful equipment is nearly unparalleled.

Recruits are drawn directly from contracted Private Military Companies, military veterans, and even currently-serving state soldiers. The largest known source of recruits of full-time soldiers is from the ranks of Caliburn Security Services, and recruits are trained at an unknown location believed to be somewhere in Norway.

Soldiers make up the bulk of the army - consisting of recruits and non-veteran members of the Order - and carry out the bulk of brute force tasks the army requires. Typically, these soldiers are organised into platoon elements of 30 men, and deployed as special forces in support of larger mercenary companies. Knights are well respected soldiers within the order and are often the commanders of large groups of templars, often acting as field commanders for groups of templars and mercenaries. Knights are granted access to extremely high tech equipment, with each knight being granted a suit of powered armor to protect them in battle. These suits are adorned in templar colors of black and red.

Knights are drawn directly from the upper ranks of the soldiery. Upon selection, they receive formal training in swordsmanship and power armour usage. Knights are often seen wielding both swords and projectile weaponry. Higher ranking Knights of the Order, known as Knight Officers, are responsible for directing entire battlefields. Commanding several companies of mercenaries, templars, and knights. Such officers are few in number, as only the most proven and capable knights progress to become officers - and only with a personal invitation from a Knight of the Round Table. 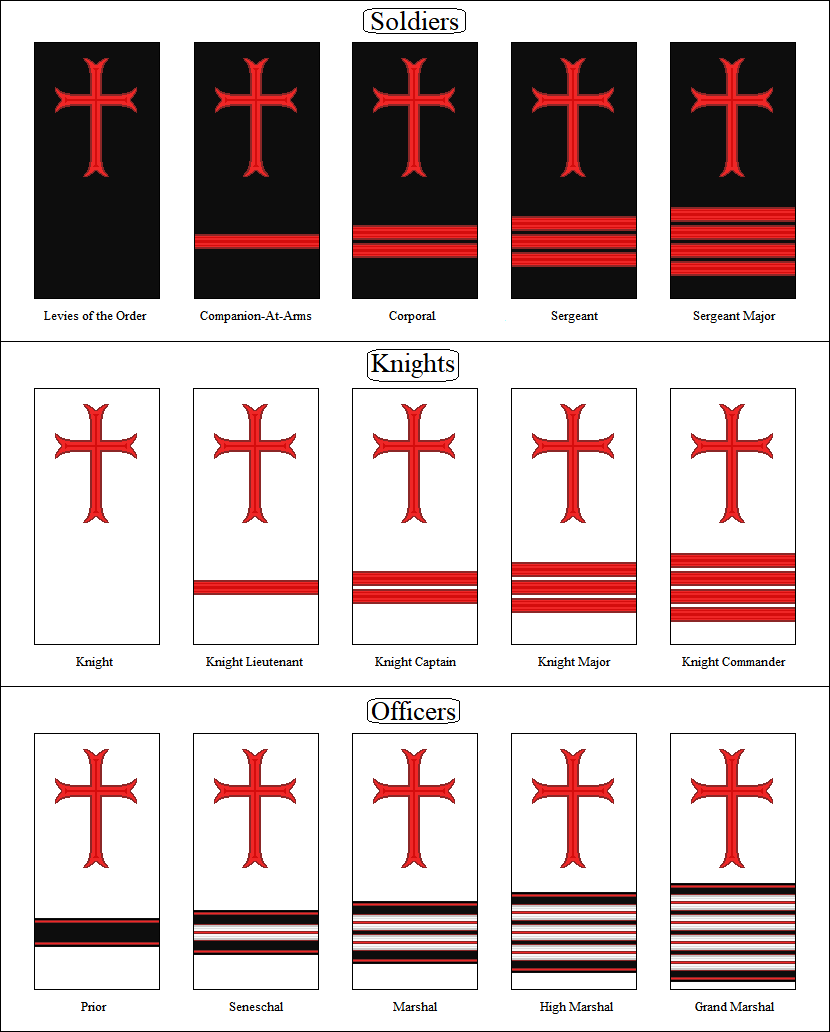